Over my nearly-40-year career as a furniture maker I’ve been aware of a hierarchy among woodworkers of different stripes. Although my formal training was in traditional furniture making through England’s City & Guilds of London system, my first job in the trade was for a designer of kitchens, who hired me to build cabinets (and their related moldings—cornices, beading to pin into door frames, beaded backboards, etc.) that would be installed by others. I was soon apprised of the social difference between myself as a cabinetmaker—a term that has traditionally encompassed those who make fine furniture in addition to what we in the States know as cabinetry—and the carpenters who worked on job sites; while I was generally at a disadvantage as a woman in a traditionally male field in rural England of the 1980s, my identity as a cabinetmaker put me on a higher standing than that of carpenters, as cabinetmaking entailed work of greater refinement. So, you know, there was that.

But it didn’t take me long to question this prejudice. After all, my cabinetry and furniture would have had nowhere to go, had it not been for the carpenters who had framed our clients’ buildings, then fitted them with floorboards, trim, and doors. The carpenters’ work seems pretty important in the end, and eminently worthy of respect. Yet the same prejudice remains widespread today, and it’s not uncommon for carpenters to retrain as furniture makers, seeking satisfaction and status from work that’s more refined.

I sometimes encounter a similar superciliousness among those who deem built-ins of any type a species of work inferior to fine furniture—when it comes to Americans, this applies especially to furniture based on original pieces produced during the golden age of East Coast furniture making, from the late 18th through early 19th century. I get it, of course. A variety of factors are at play, among them the following:

As someone who designs and builds furniture for a living and is not supported by family wealth or retired from a career in pharma or finance, I’m beyond over the snobbery. I do a variety of work and am grateful for it all. The job I just completed provides a great illustration of why I love my work, regardless of where I might rank on anyone else’s scale.

When the customer, Jeff, first got in touch, he wondered whether I would do something as basic as modify a pantry; he mentioned red oak plywood. He seemed to think it might be beneath a person of my skills. We’re acquaintances, having met through mutual friends, so that was a preliminary point in favor of saying yes, if only to be helpful. Also factor in that he contacted me shortly after the media had just been flooded with news of a recession; with PTSD from the 2007-2009 recession, I was even more primed to say yes to paid work of any kind. I had in mind plywood shelves—perhaps on pull-out hardware for easier access. We scheduled a meeting, with masks. And that was when I realized the job would be far more interesting, as well as challenging, than Jeff had given me to imagine.

Not long after we started discussions, Jeff showed me a sketch of what he wanted. The idea was to match the look of his existing cabinetry pretty closely, though with domestic instead of tropical species for the pulls. As a woodworker himself, he’s familiar with building techniques, so I explained how I envisioned making the cabinetry insert. I would build it in three sections for ease of delivery and installation; otherwise it would be heavy and unwieldy. The sections lock together at the front, because each pair shares a horizontal rail of the face frame.

Each section would have its own interior fittings—drawers at the bottom, pullouts in the middle, and a shelf for the microwave and taller items at the top, left open for access to the original closet light and an electrical receptacle for the microwave—but all of the drawer and door faces would be made from a single sheet of high-grade veneer-core plywood faced in plainsawn red oak, with the grain continuous throughout. To preserve the match I would have to pay attention; a single screw-up on any element would probably mean replacing the whole sheet. Beyond that, to match the original cabinets I was going to edge each door or drawer front with solid cherry, mitering the corners and routing a radius with a router. An error at any later stage would mean duplicating a lot of labor, which can be disastrous when the work is your livelihood.

Then there were the pulls. I’ve made L-shaped pulls for a few Mid-Century-style kitchens, but on my first visit to the job site, which is in the forest (and so, relatively dark), I didn’t even notice that the pulls on the original cabinets have a strip of inlay.

It was a simple detail, but one I’d have to figure out how to produce safely.

Here’s how I made these pulls

To start, I cut the bevel at the front corner on the tablesaw. 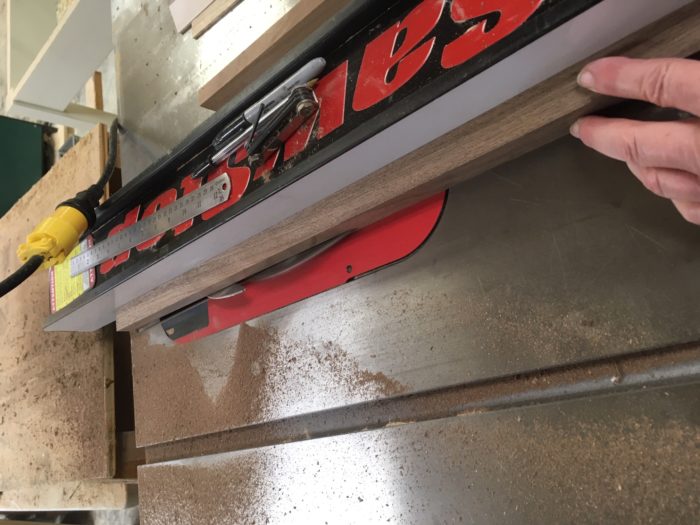 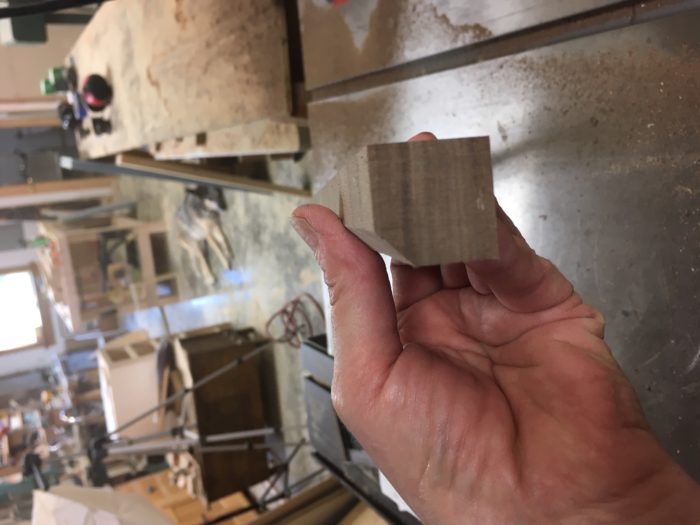 Next, I ripped small strips of cherry a little over the width and thickness of the bevel, in case of movement during the glue-up. 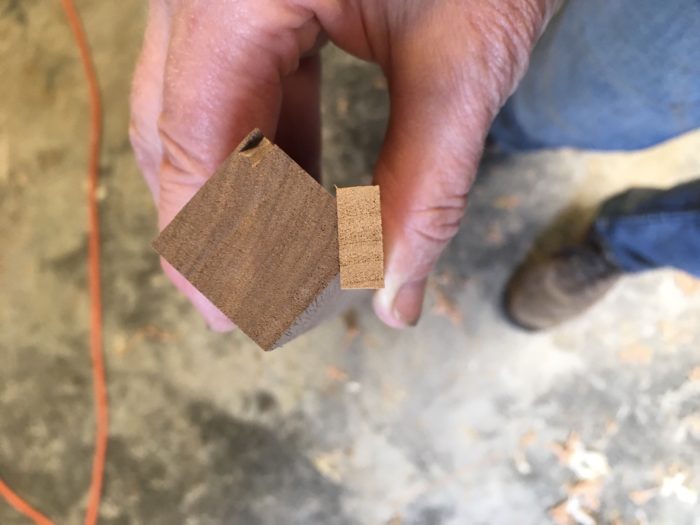 After that, it was a simple matter to radius the cherry corner with a router (I used a radius bit with a bearing, because my router table was still underneath a pile of stuff for another job).

To finish, I cut the square leg of the rabbet on the tablesaw with the riving knife removed. I followed that with the one that’s slightly beveled.

Another challenge involved the pullouts. Jeff had specified a pair, side by side, each of which would have two tiers. I was concerned that the contents of the lower section would be hard to see and hard to reach; when I made a mock-up, this concern proved valid. The whole point of this pantry retrofit was to make things more user-friendly, so I wanted to come up with something better.

After much insomnia-fueled pondering in the middle of one night, I recalled that my pal Bruce Chaffin (@brucephl on Instagram) had built most of his base cabinets with a secondary drawer inside of the primary one, giving him and his wife, Jana Moore, an additional level of storage capacity they could access independently of the main one. Ingenious! Jeff approved the suggestion, and I modified the interior of the middle case accordingly. (Bruce and Jana’s striking kitchen is one of the case studies in my new book, Kitchen Think.)

Installing custom-made pulls that have a thin face for attachment with screws is always hair-raising for me. I installed these with the aid of a TP-1935 cabinet hardware jig. 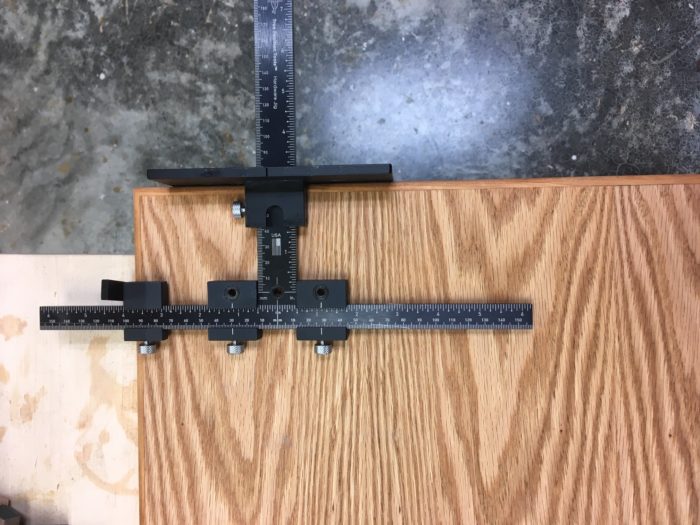 I left the vertical pulls for last, because Jeff had decided he wanted them inlaid with a random wave pattern and I was going to have to figure out how to produce it.

Here’s how I made the wave-inlaid pulls

I made a template out of 1/2-in. plywood with a sinuous pattern long enough to rout both pulls in a single length of material. Jeff approved the pattern before I went any further. 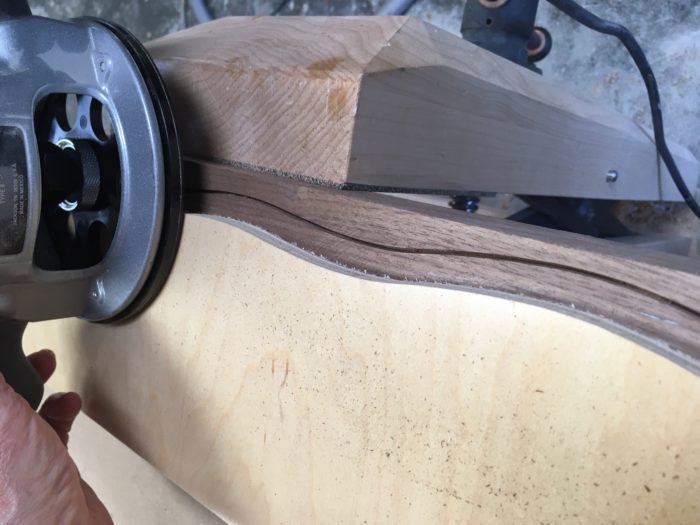 I used a router with a collar and a 1/16-in. cutter. Because I had only narrow pieces of walnut in the shop (wider stock would have made this easier), I left the stock as wide as possible and screwed the template to it at each end, in areas that would be waste. The stock was too narrow to hold clamps, but screws held it securely. I mounted the stock in the vise, high enough not to interfere with the router.

After routing the groove, I ripped the stock to width so that the inlay would be approximately centered. Then I ripped a strip of hard maple, using a push stick with a very skinny end (it took three tries to get just the right width) and glued it in, using a mallet. To make these pulls more ergonomic, I routed both sides with a shallow cove that provides a grip.

I am always nervous when the time comes for installation. In this case, I had built the cabinetry to fit snugly in the cased opening. But what if it should prove too snug? Fortunately, Jeff and I were able to slide it right in (with a little pushing). I leveled the base, and then we added the other sections. I returned after the weekend to install the roughsawn cedar trim, which I cut roughly to size and shaped at the shop. Everything about this piece will darken over time. (The finish is Watco “Natural,” as spec’d by Jeff.)

Does this piece, with its red oak plywood, its knotty cedar trim, its mechanical drawer slides (I really don’t think I need to justify the use of Blum Tandem slides at this point, even in this venue—they’re the bomb), and its adjustable “European” hinges (which, by the way, are a special variety recommended by Blum’s Customer Service Department to suit the special conditions of this application—the 32mm hole is 14mm from the edge of the door, instead of the usual approx. 1/8 in.) deserve to appear under the auspices of Fine Woodworking? I certainly think so. Here’s why.

Call me simple, if you must—I’ve found it’s certainly easier to be happy that way.